5 Lessons from the 2019 State of E-Discovery Report

We’re just past the midpoint of the year, and all across the U.S., people are taking vacations, heading out on road trips, cooling off at the pool, or barbequing with friends and relatives. Physically stepping out of the office affords the perfect opportunity to metaphorically step back and take stock. Are we working on the right things? Are we spending time and effort where it matters? What could we be doing better?

Ediscovery professionals making that mid-year assessment would do well to study the 2019 State of E-Discovery Report. This compilation of surveys and information, produced by FTI Consulting and Exterro, takes the pulse of the ediscovery industry, asking what issues are coming up and what proactive companies should be doing to get or stay ahead.

Here are the key take-home messages from Hanzo’s perspective.

1. The ediscovery industry is growing rapidly... 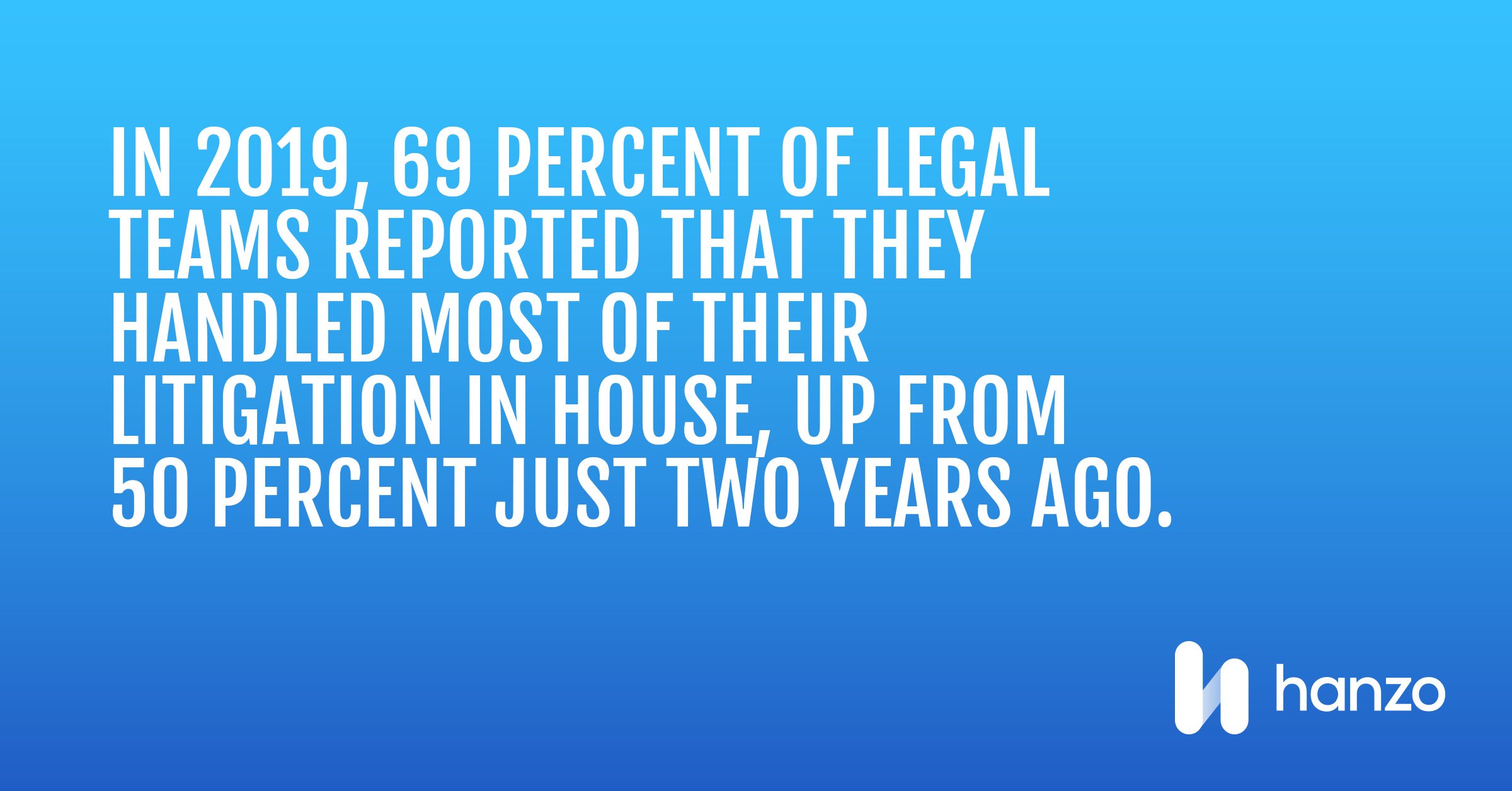 Buckle your seat belts: companies are spending more on ediscovery, outsourcing less, and wrangling more data than ever before, and the growth curve shows no signs of slowing down. An aggregated view of publicly available data projects that the ediscovery industry—valued at $10.1 billion in 2018—will nearly double by 2023, reaching $18.7 billion.

At the same time, companies are insourcing more of their litigation processes, forgoing law firms and alternative legal service providers to develop their own ediscovery teams and resources. In 2019, 69 percent of legal teams reported that they handled most of their litigation in house, up from 50 percent just two years ago.

Much of this growth is driven by the explosive growth in data, which brings us to our next point.

2. But data volume and data types are growing faster. 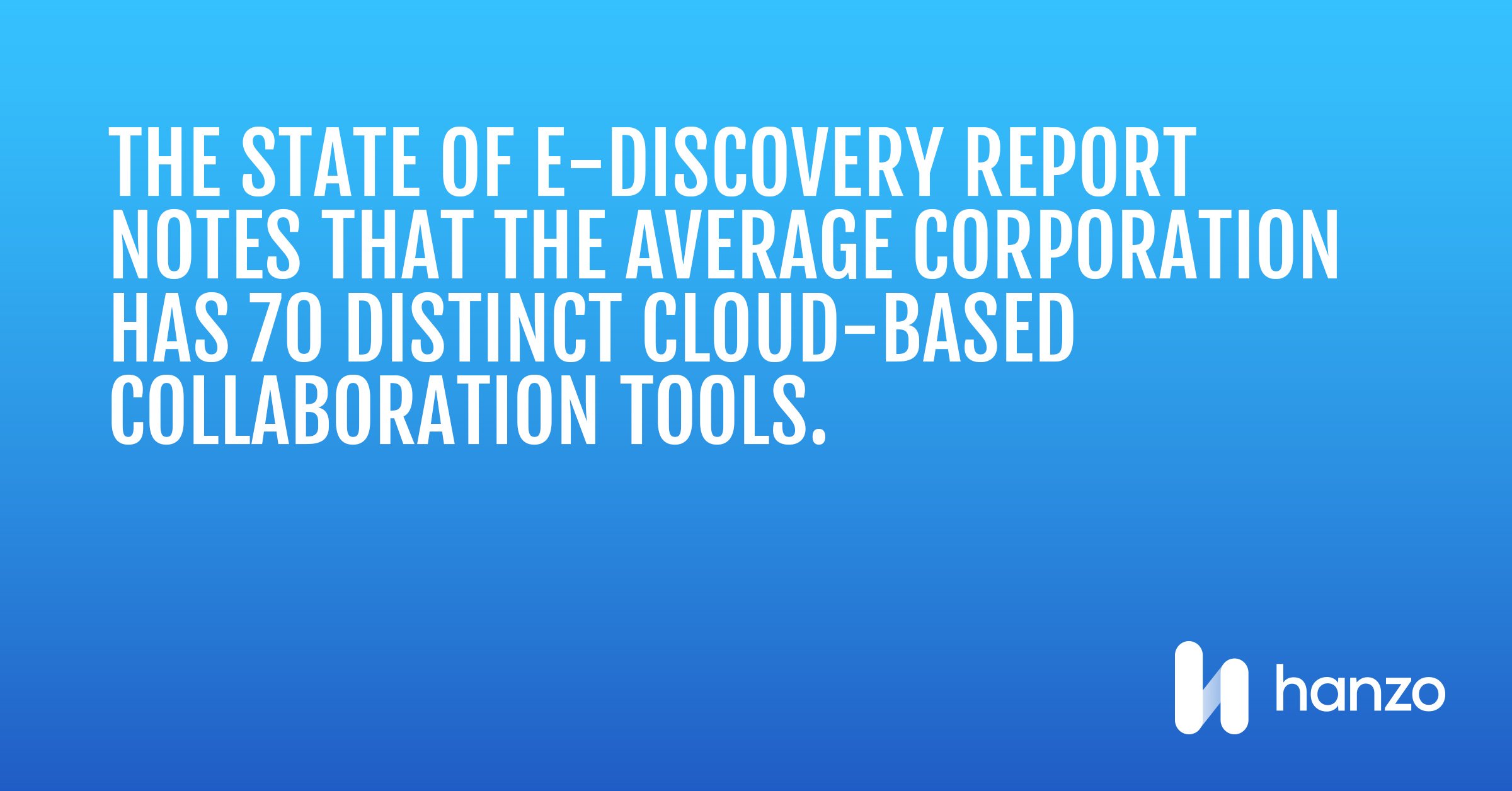 IT professionals are seeing an explosive growth in data. In 2014, IT professionals were responsible for managing 230 GB of data; by 2020, that number is projected to reach 1,231 GB, a more than five-fold increase. And that data isn’t all of the same type of nature, so it can’t all be handled in the same way. The State of E-Discovery Report notes that the average corporation has 70 distinct cloud-based collaboration tools. Not seven; seventy. That’s an overwhelming amount of data from a huge range of different sources—any and all of which may contain potentially responsive data and therefore be relevant to an ediscovery matter.

If you thought that was daunting, this is worse: only 51 percent of large corporations (those with over 10,000 employees) reported that they had the ability to collect discoverable data from social media and instant messaging apps. If only half of these large organizations have mastered these existing data types, it’s a fair bet that smaller organizations are even further behind.

That gap matters more than ever, because courts are starting to recognize the value of social media data in resolving disputes.

3. Social media content is emerging as an important data source. 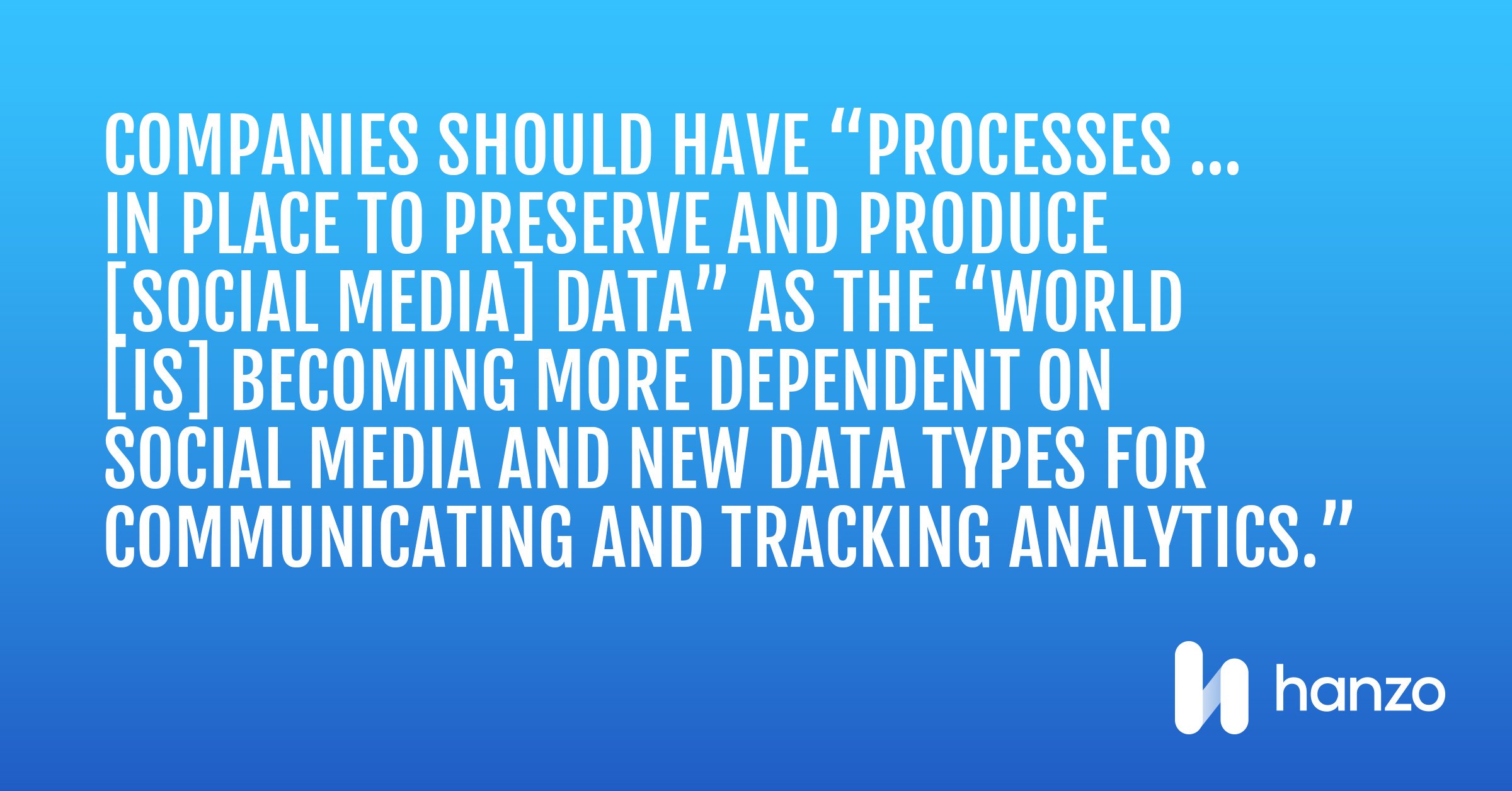 The State of E-Discovery Report notes that, historically, ediscovery has been limited to familiar data types, with most litigants ignoring social media and emerging data sources like activity trackers. But that’s all changing, such that companies should have “processes … in place to preserve and produce [social media] data” as the “world [is] becoming more dependent on social media and new data types for communicating and tracking analytics.”

The report cites Hinostroza v. Denny’s Inc., No. 2:17-cv-02561-RFB-NJK (D. Nev. June 29, 2018), to illustrate this shift. In this personal injury case, the plaintiff sought damages for “emotional distress, adverse emotional or mental state, and other emotional injury.” Denny’s asked for information from her social media to assess the extent of those damages. The court agreed that “[social networking] content is neither privileged nor protected by any right of privacy.” Moreover, social media information could be “relevant to claims of emotional distress” as it “is reflective of the individual’s contemporaneous emotions and mental state.” The court concluded that social media data was discoverable and proportional and ordered its production.

To effectively manage these emerging and dynamic data types, companies need to reimagine their ediscovery departments. 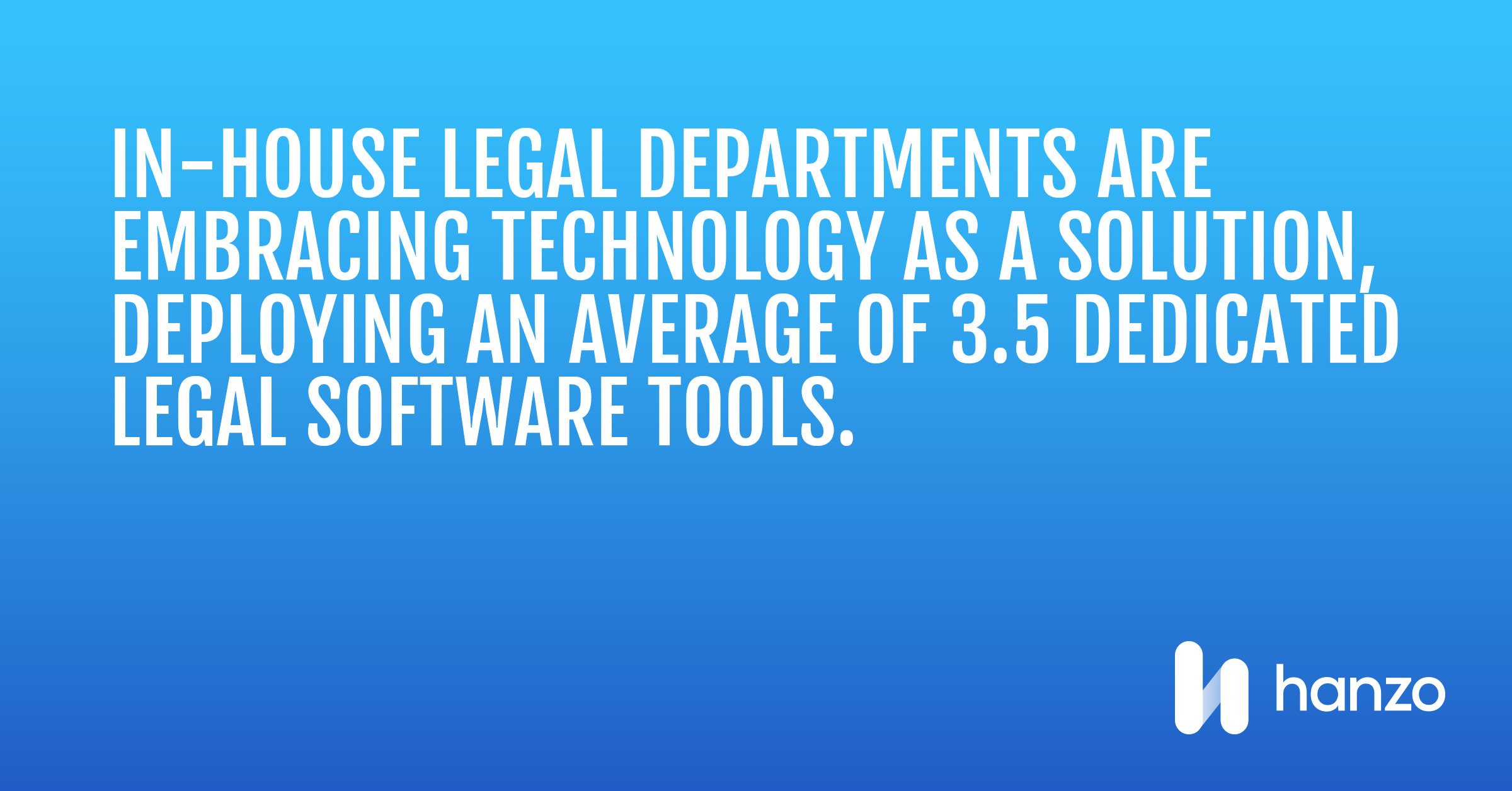 As companies keep more of their ediscovery in house, they’re also expanding their project management capabilities. Lawyers now manage ediscovery in just 34 percent of in-house legal departments, down from 42 percent two years ago. Well over half—65 percent—of surveyed legal departments categorized themselves as “structured, managed, or optimized” in legal project management.

Fortunately, in-house legal departments are embracing technology as a solution, deploying an average of 3.5 dedicated legal software tools. Three quarters agreed that technology is making their work easier, and 66 percent reported having no concern about losing their jobs to artificial intelligence.

Despite the increasing workload, most of those legal teams are on the small side, with 78 percent having fewer than 50 people. While they may be small in terms of overall headcount, they are mighty: 84 percent of those teams report that they are either “somewhat” or “very” satisfied with their performance.

The increased willingness to leverage technology has empowered legal teams to do more with less. Which is a good thing, since courts are demanding more from ediscovery teams.

5. Courts expect a higher level of proactive cooperation in ediscovery. 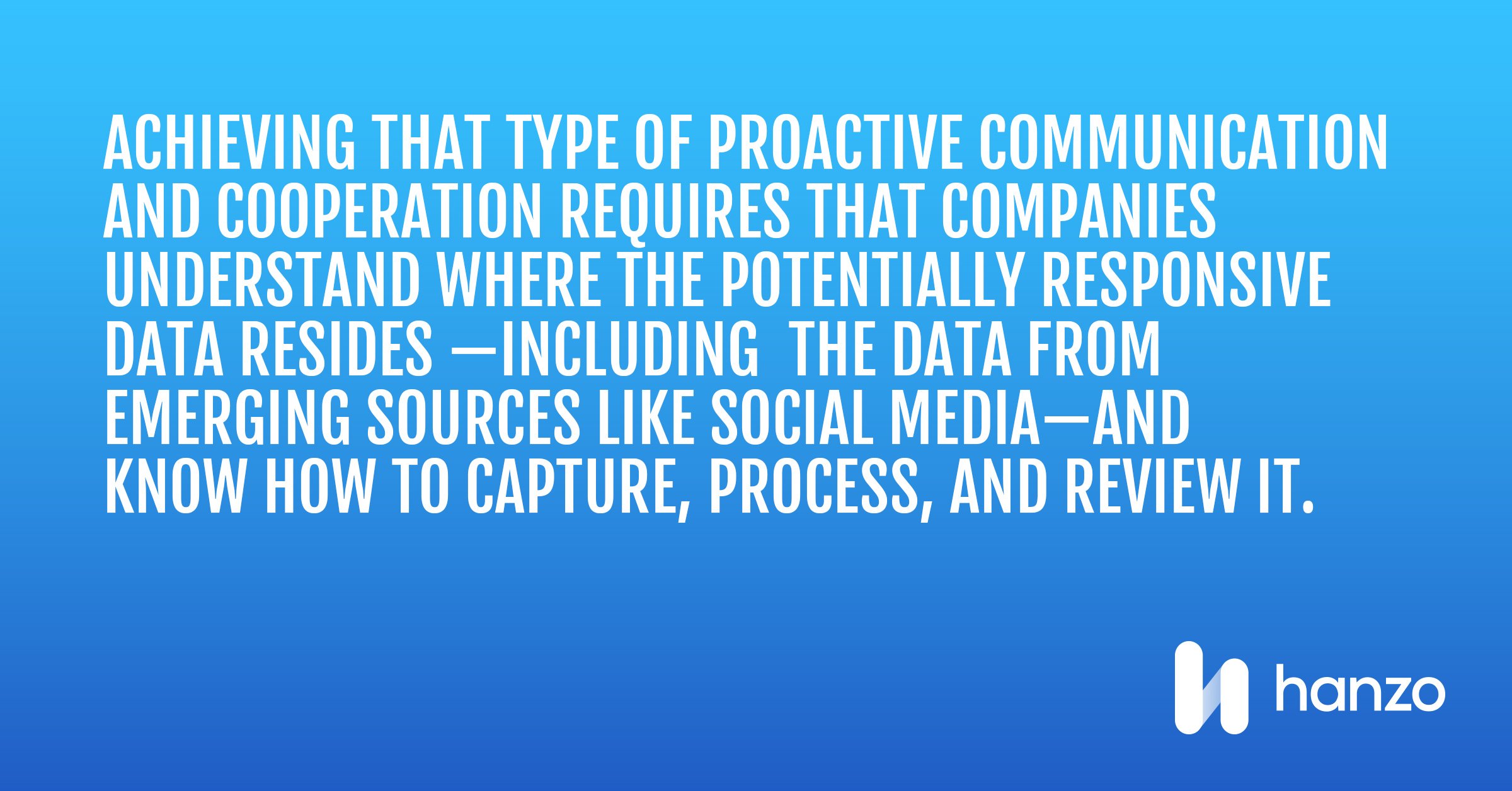 In a survey of judges, 56 percent viewed themselves as ediscovery “case managers” who would “promptly address[] discovery issues” brought to their attention but who wouldn’t actively monitor discovery or intervene before such disputes arose. The remaining half of judges were evenly split, with 22 percent considering themselves “active case managers” for ediscovery and 21 percent stating that they should have no role in managing ediscovery.

The vast majority—83 percent—of judges expect counsel to work cooperatively to define the parameters of ediscovery. Three quarters expected to see “proactive communication before the meet-and-confer” required by Rule 26(f). Achieving that type of proactive communication and cooperation requires that companies understand where the potentially responsive data resides —including the data from emerging sources like social media—and know how to capture, process, and review it.

Wondering how to do that? Hanzo can help. We designed our best-in-class online data collection technology specifically to meet the needs of ediscovery and regulatory compliance professionals. Hanzo Dynamic Capture uses a sophisticated web crawler to create native-format website replicas that encompass every element of the original website, collecting the content you need to take your ediscovery to the next level. Our archives truly have to be seen to be believed, so contact us for a demonstration today.

Hopping on Down an Internet...

Today, a tremendous amount of your organization’s client communications are happening through the representations on ...
Read More >

News from The Sedona...

This past week, I had the privilege of participating in The Sedona Conference Working Group 6 (WG6) Annual Meeting in ...
Read More >

Building a Career in...