Are Your Emojis Saying What You Think They Are? A Cautionary Tale From Harrison v. City of Tampa

How are you preserving emojis for ediscovery?

Hold on just a minute. Do people really use emojis in a business setting? You bet, though not everyone is on board. But now that offices are more dispersed than ever—and constantly connected through collaboration apps like Slack—emojis can be a powerful way to more completely express your personality with people you may never meet face to face. Then again, they’re also a great way to open the door to inappropriate communications, if you’re not careful. That’s one of the lessons from our latest case law discussion, but—spoiler alert—emojis didn’t end up being a direct issue in this case. Still, it illustrates how emojis can come up in run-of-the-mill cases and how courts are struggling to express what they mean.

The Colorful Facts of Harrison v. City of Tampa

The plaintiff in this case, Brandy Harrison, was assigned through a staffing agency to work in the water department for the defendant, the City of Tampa. She alleged that she was subject to sexual harassment while she was there and that her work assignment was unlawfully terminated in retaliation after she complained about the harassment. Harrison v. City of Tampa, No. 8:17-cv-01369-T-02CPT (M.D. Fla. June 4, 2019).

Harrison stated that about two weeks after she started working for the City, “she began having problems” with Tim Johnson, who assigned her work, and with Ron Calderoni, her supervisor. She complained that she was “beginning to feel uncomfortable” with Johnson and “wanted his behavior to stop.”

What behavior? Harrison provided five notes that she said Johnson had left on her desk; one included a request to “take a picture of yourself” and another stated “dang you look good as hell.”

Harrison said that Johnson had also “bought her gifts of shoes and underwear” and messaged her through texts and Facebook. These messages included statements such as “damn you are so sexy” and “sitting up thinking about you Sexy Red.” In the court’s words, these messages included “a number of emojis that can be read to indicate that Johnson was romantically attracted to” Harrison.

Just what emojis are we talking about here? Unfortunately, that’s not entirely clear.

The (Also Colorful) Emojis in Harrison

In a footnote, the court explained that the emojis in Johnson’s messages “show a face kissing, a face with hearts for eyes, and what appears to be a smiling dog with hearts next to it.” We’re guessing that the first is the “kissing face” emoji and the second is the “smiling face with heart eyes” emoji, but the third one is a bit of a mystery.

This could—under some circumstances—be a real problem. We’ll get back to that in just a moment.

Returning to Harrison’s case, the court noted that at first she “occasionally responded favorably” to Johnson’s advances. She sent a couple of responses with the “smiley-face emoji” (though there are numerous options for that emoji, and which smiley face the court meant isn’t at all clear from the opinion). Ultimately, though, she wrote to Johnson that he was “doing too much.”

Longish story short, after Harrison complained about Johnson’s behavior, she was terminated from her assignment with the City. So why, in this opinion, did the court grant the City’s motion for summary judgment?

Hang on, because this case is about to take a left turn. During her assignment, Harrison “entered into a consensual relationship with another City employee, Marquis Wright.” In a soap-opera-worthy twist, Wright had made his own complaint to Calderoni: he said that “he was in a ‘fatal attraction’ situation with [Harrison],” who had been sending “threatening text messages” and “wo[uld]n’t leave him alone.” In the court’s interpretation, her messages included “veiled threats of a type that might be sent in a spurned romance situation,” such as “you hurt me imma hurt you back.”

(There’s an aside here that ediscovery professionals might find amusing: Harrison stated that she could not “produce a complete set of text messages” to rebut Wright’s contentions because “both her original phone and a replacement flew out of her car window” when she was in an accident.)

At any rate, the court held that this development provided the City with a defense. As to Johnson, who was Harrison’s coworker, the City would only be liable if it knew of his behavior “but failed to take prompt remedial action.” Here, Johnson was initially “warned to cease non-work-related communications” with Harrison; when he disregarded this warning, the City “launched another investigation and instituted termination proceedings against” him. (Harrison also had complaints about harassment from Calderoni, but they involved in-person behavior only, so we’ve skipped them in this retelling.)

Regarding Harrison’s claim of retaliation, the court held that her threats to Wright gave the City a “legitimate, non-retaliatory reason” for her termination. Harrison was unable to convince the court that the City’s reason was pretextual, so the court ordered summary judgment for the City.

Now, let’s get back to those emojis.

How Emojis Can Be Problematic

The emojis in Harrison weren’t central to the court’s decision—there was pretty clearly sexual harassment without them. But it’s easy to imagine a situation in which the words of a message were more neutral, but the emojis themselves added a layer of harassment, bullying, or other misconduct.

And that would pose an issue in ediscovery, because Harrison illustrates perfectly the fact that courts haven’t yet figured out how to deal with emojis. What emojis are we actually talking about? What do those emojis mean? Whose version of an emoji controls the court’s interpretation of its meaning?

This last question brings up an important nuance about emojis that many people haven’t caught on to yet: the emoji that’s displayed on a screen depends on the platform and device it’s sent—and received—through. So the emoji you send might not be the emoji your conversational partner receives. Plus, emojis are constantly changing, so the message you sent might look different six months later.

(Alanis Morissette might call it ironic that people who are using emojis to establish their personality and express themselves more fully could, in fact, be sending messages that aren’t what they mean or who they are at all, but that’s a topic for another blog.)

When it comes to ediscovery, are you prepared to deal with emojis in business communications?  Are you properly collecting the surrounding context of conversations so you can figure out what the emoji means to the speakers (or their workplace)?  The meaning of an emoji is often driven by the specific community that uses it in their everyday communication. Are you preserving how the emoji appeared on a certain platform (Apple v. Microsoft v. Google)?  Emojis are starting to crop up more and more, especially in collaboration applications like Slack. Preserving the messages the way they appeared to users of a platform, and making sure you get the surrounding context, can reveal the meaning of the message being sent. In a court battle about what an emoji looked like and what it meant, the party with the best-preserved evidence may well win.

Ready to learn more about the complexities of emojis?

Please join us for our webinar, Emojis and the Law: Real-World Ediscovery Challenges of Enterprise Collaboration, on Thursday, October 31, 2019, at 2:00 p.m. Eastern. We’ll have a panel of experts talking about how businesses use emojis and what ediscovery professionals should be thinking about when they preserve and collect that evidence. 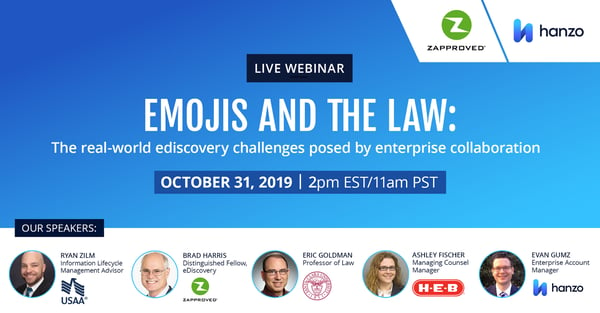 Registration is open here—we look forward to seeing you!

Better Together: How Data...

Some things that are great on their own turn out to be even better as half of a dynamic duo. We’re talking peanut ...
Read More >

There’s no way around it: ediscovery can be expensive. With the constantly expanding universe of data—and the ...
Read More >

Ediscovery: How the Federal...

A lot has changed since the Federal Rules of Civil Procedure (FRCP) were first enacted in 1938. Yet the goals of ...
Read More >