Parties “Do Not Get to Select What Evidence They Want to Produce, or From What Sources”

Are you preserving all of the electronically stored information (ESI) that’s relevant to your litigation matters? What about information that only exists online, like social media comments, website text, or blog posts? If not, you might be spoliating discoverable information—and the burden is on you to preserve that ESI, regardless of whether your opponent has specifically requested it. That’s the message from the court’s dicta in our latest case law discussion.

When You Were Mine: The Facts of Paisley Park v. Boxill

The court’s pretrial order “directed the parties to preserve ‘all electronic documents that bear on … the subject matter of this lawsuit.’” For its part, the Prince Estate requested discovery of “all documents” related to the dispute, indicating that “the term document had the broadest possible meaning” under Rule 34 of the Federal Rules of Civil Procedure.

RMA provided some discovery but didn’t produce any text messages. Eventually, RMA admitted that it “could not produce responsive text messages” because they had not been preserved. Specifically, RMA’s principals, David Staley and Gabriel Solomon Wilson, “did not disengage the auto-delete function on their phones,” allowing texts to be automatically deleted after a period of time. More importantly, though both Staley and Wilson used their cell phones for RMA’s business, Staley actually “wiped and discarded his phone,” and so did Wilson—twice. Nor did they back up their text messages before destroying their phones.

Although RMA agreed that some evidence was irretrievably lost, it argued that it had taken “reasonable steps to preserve relevant evidence” and that the loss of text messages was neither prejudicial nor intentional.

The court didn’t see it that way.

I Could Never Take the Place of Your ESI: The Court’s Ruling

The court noted that it could sanction spoliation under either Rule 37(e), if a party failed to “take reasonable steps to preserve ESI that is relevant to litigation,” or Rule 37(b), for failure to obey its pretrial discovery order.

The timing here was such that RMA was obligated to preserve its texts before any of Staley and Wilson’s phones were wiped and discarded. And while “a party is under no obligation ‘to keep every shred of paper’” or byte of electronic evidence, Staley and Wilson’s “text messages were likely to contain information relevant to this litigation” that they were obligated to preserve.

Of course, they both completely failed in this regard. Neither Staley nor Wilson implemented a litigation hold, suspended the auto-delete function for their phones’ text messages, or backed those messages up to external or cloud storage. These failures were unreasonable—but they weren’t the worst of it. “Most troubling of all,” the court noted, both of RMA’s principals “wiped and destroyed their phones after … RMA had been sued,” with one of those instances coming after the court ordered the parties to preserve ESI. The lost messages—especially those between Staley and Wilson—could not be replaced or restored from other sources.

RMA countered that it “could not possibly be expected to know” that it should have preserved text messages. For starters, it said, the Prince Estate had not specifically requested text messages in discovery or asked it to preserve text messages in a preservation letter. But, as the court pointed out, the “rule does not require that the requesting party … identify[] all types of ESI that it might seek in the future.” Rather, the burden remains on the preserving party to take reasonable steps to preserve evidence that would be relevant to the dispute. That requirement extends, under Rule 34 and the Prince Estate’s broadly defined request, to “any document, including ‘data or data compilations—stored in any medium from which information can be obtained … directly.’”

And while litigants are—despite RMA’s protestations—well aware that text messages are discoverable, the court took the opportunity to extend its logic into other types of electronic evidence.

Sign O the Times: Court Opines About Other Types of ESI

“In the contemporary world of communications,” the court noted, there exists both “the potential and reality of finding the modern-day litigation equivalent of a ‘smoking gun’ in text messages, emails, and possibly other social media.” This comment reflects the reality that communication no longer happens exclusively in hard-copy documents or email threads; rather, ESI is dispersed across a broad range of data types. In light of that diversity and the relative ordinariness of text messages, the court confessed that it was “baffled as to how [RMA] can reasonably claim to believe that [Staley and Wilson’s] text messages would be immune from discovery.” 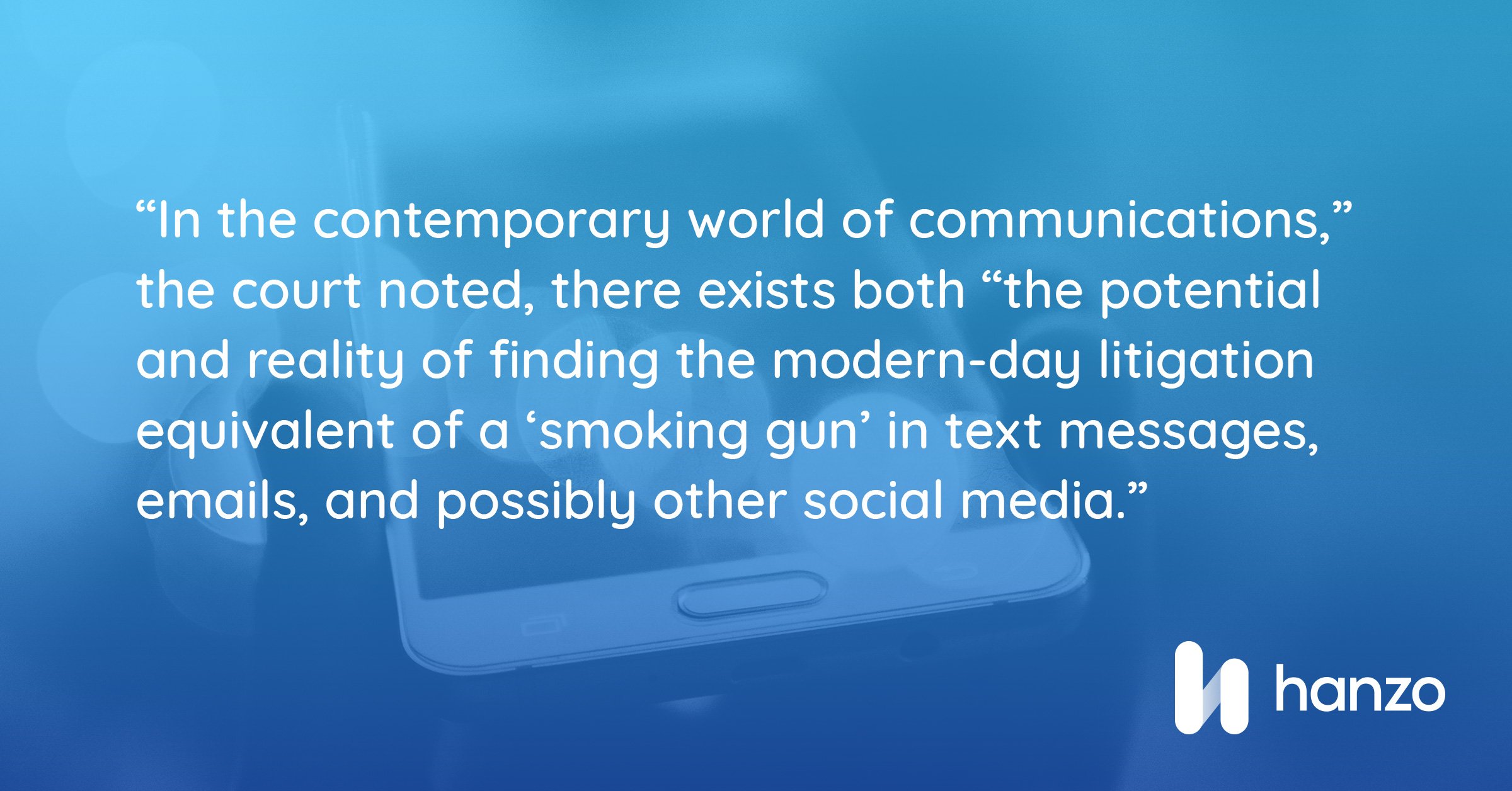 More importantly, the court continued, parties “do not get to select what evidence they want to produce, or from what sources,” even if those sources are less common. Rather, parties “must produce all responsive documents or seek relief from the court.”

Finding that RMA egregiously spoliated ESI with the intent to deprive the Prince Estate of that evidence, causing prejudice, the court imposed monetary sanctions. It deferred consideration of additional sanctions, including an adverse inference jury instruction, until closer to trial.

If I Was Your Ediscovery Lawyer: Lessons From Paisley Park

While the court in Paisley Park only mentioned social media evidence, its take-home message clearly extends to all types of online ESI. And your opponent doesn’t have to spell out every type of evidence—online or otherwise—that it might eventually request. Bottom line: if you have information online that may be relevant to a dispute, the onus is on you to know about it, preserve it, and eventually produce it.

That said, this is not a reliable two-way street just yet. If you believe that your opponent may have online ESI that you want to see, you should specifically request it in discovery. Why? While the court in Paisley Park had no hesitation finding intentional spoliation of text messages—a common source of evidence—it’s less likely that a court would find the loss of online ESI to be intentional spoliation. After all, the web is still a fairly novel evidentiary source that many litigants haven’t begun to think about, so it’s helpful to put your opponent on notice via a direct request.

Also, remember that discovery that can be requested under Rule 34 includes “any … electronically stored information—including writings, drawings, graphs, charts, photographs, sound recordings, images, and other data or data compilations—stored in any medium from which information can be obtained either directly or, if necessary, after translation … into a reasonably usable form.” Include this definition, as the Prince Estate did here, in your discovery requests, and be prepared to remind the court and your opponent that online ESI clearly falls within this scope. 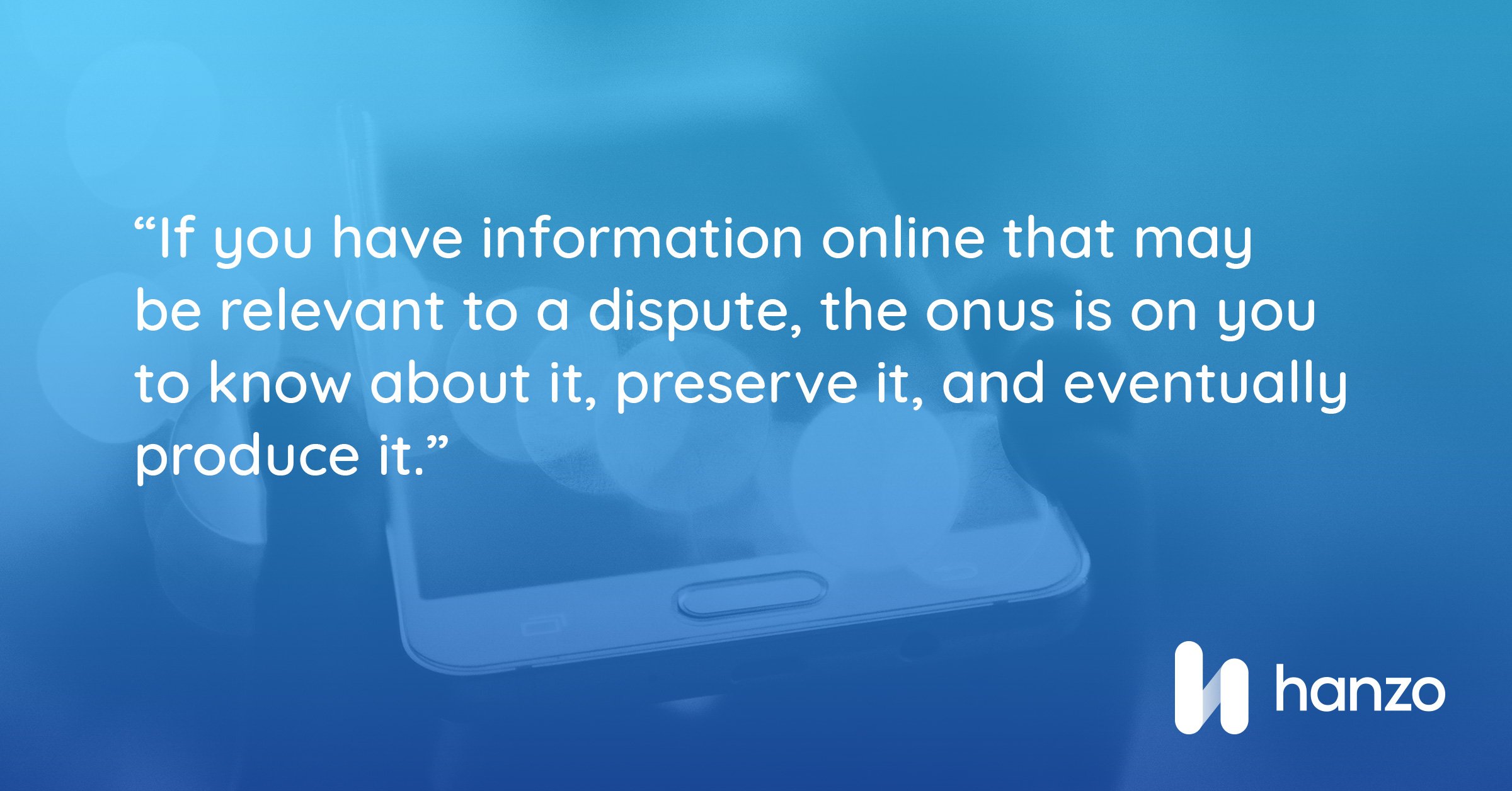 Take Me With You: Preserve Your Online ESI Before It’s Lost

We’ve written before about how “private” social media posts are discoverable and how websites can be a data source. The court’s dicta here adds to the coming flood of online ESI in litigation, which will only become more common as ediscovery professionals learn what’s available and how to use it.

The burden is on you to know about and preserve your online evidence, whether it’s on social media, your company’s homepage, a corporate blog, or anywhere else. But online evidence can be slippery: the web changes constantly, and simple methods like screenshots don’t capture dynamic and interactive components like videos, GIFs, image carousels, or chatbots. Spoliation may happen with any website update, or through incomplete preservation methods that fail to capture all of the content and context of a typical website or social media feed.

Are you ready for the challenge? If not—or if you’re not sure where to even begin—get in touch with Hanzo today for a demo. We can help you preserve online evidence, no matter how complex it is.

It seems like it should be easy to prove that your company owns its intellectual property (IP)—but these days, it can ...
Read More >

We've come to that part of the calendar year known as the "holiday season." Yes, there are the traditional holidays we ...
Read More >