The internet, and especially social media, represents a rich reservoir of potential evidence for use in litigation. That reservoir grows broader and deeper every day—and sometimes, litigants underestimate how much of that online information is discoverable.

Recently, we read a very succinct opinion that highlighted the information that can be found online for those who are willing to look for it. While the one-paragraph opinion clearly followed Strunk and White’s timeless advice to “omit needless words,” we’re going to unpack it a bit before discussing the lessons we took from it.

The Facts of Vasquez-Santos v. Mathew

Yet, during discovery, Mathew found “pictures depicting [Vasquez-Santos] playing basketball” that had been “posted on social media after the accident.”

Vasquez-Santos claimed that these photos were taken “in games played before the accident,” and only posted to his social media later. Further, in his view, those photos were not his to control as he did not take them or post them himself.

In the lower court, Vasquez-Santos evidently extended this evasion. As the appellate court noted, his “response to prior court orders” for discoverable information “consisted of a HIPAA authorization refused by Facebook, some obviously immaterial postings, and a vague affidavit claiming to no longer have the photographs.”

Mathew wasn’t buying these denials. She, therefore, moved the lower court to compel “access by a third-party data mining company” to Vasquez-Santos’s “devices, email accounts, and social media accounts.” Wisely, though, Mathew limited her requests, seeking only “photographs and other evidence of [Vasquez-Santos] engaging in physical activities” that might contradict his claims of disability.

The trial court denied that motion, leading Mathew to appeal the ruling to the appellate division.

In a unanimous ruling, the appellate court reversed the trial court, allowing limited discovery of Vasquez-Santos’s social media photos. It began by noting that “Private social media information can be discoverable to the extent it ‘contradicts or conflicts with [a] plaintiff’s alleged restrictions, disabilities, and losses, or other claims.’”

This should come as absolutely no surprise: discovery generally encompasses all sorts of private correspondence so long as that information is relevant to establishing or debunking a claim or defense. Litigants, after all, put aspects of their private lives in dispute by asserting claims or defenses.

Here, Vasquez-Santos argued that his car accident with Mathew left him with injuries that prevented him from playing basketball, resulting in damages. He sought to hold Mathew responsible for those damages. She was thus entitled to explore the extent of the claimed damages—and evidence that Vasquez-Santos continued to be pictured playing basketball would be directly relevant. Mathew was therefore “entitled to discovery to rebut” Vasquez-Santos’s claims regarding the timing of the photos and the games they depicted, as that evidence could allow her to “defend against [his] claims of injury.”

The appellate court found it “of no import” that Vasquez-Santos didn’t personally take the photos (which would be difficult to do while playing basketball) or post them to social media. As it noted, “he was ‘tagged,’ thus allowing him access to” some of the photos, while “others were sent to his phone.” The fact that those photos were shared with him granted him sufficient control over them for purposes of discovery.

Nor did Vasquez-Santos’s earlier responses help his case, as they “did not comply with his discovery obligations.”

The appellate court also noted that Mathew’s request was “appropriately limited in time” to “only those items posted or sent after the accident,” and similarly limited “in subject matter” to “those items discussing or showing [Vasquez-Santos, mistakenly designated here as the defendant] engaging in basketball or other similar physical activities.” Here, the court also cited Forman v. Henkin, which we reviewed last year, for its discussion of the discoverability of social media evidence and the appropriateness of limits in that discovery. 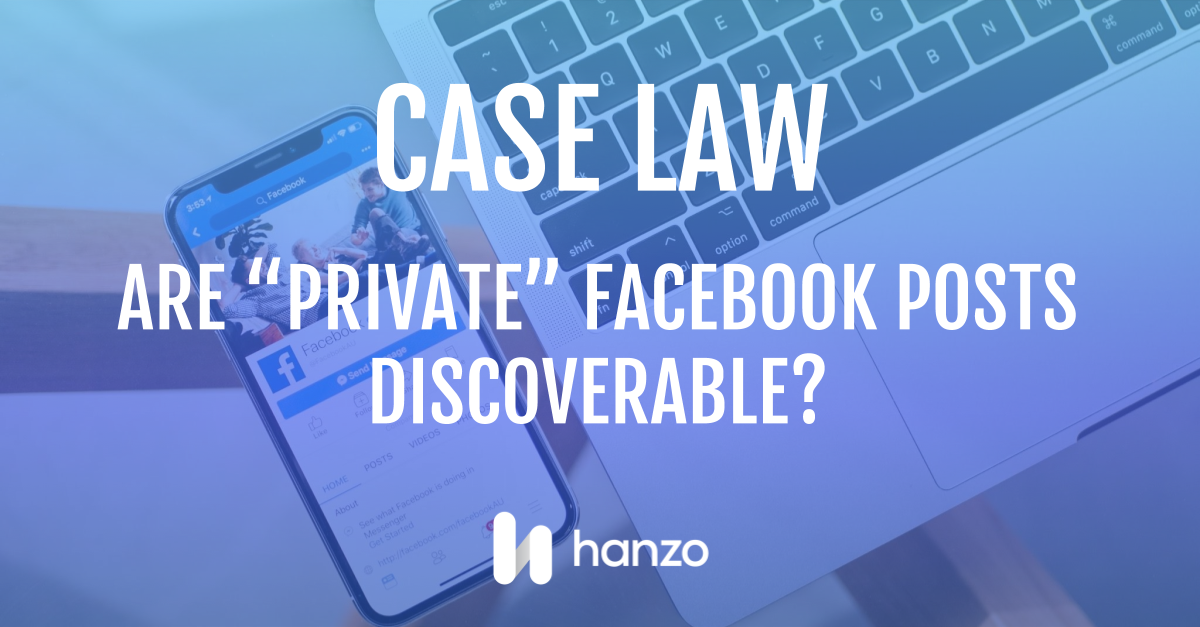 This opinion offers a surprising number of lessons given its brevity.

First, litigants must remember that they open the door to discovery by filing a lawsuit or asserting a claim or defense. As your parents may have told you, you can’t always have your cake and eat it too (which, honestly, defeats the purpose of having cake, but still). If you genuinely don’t want to disclose information that would support or undermine a claim or defense, you typically have the power to keep it private—by withholding the argument.

Second, if information exists online, count on someone finding it. In fact, this lesson extends more broadly than just what you or your friends post on social media: now that there are cameras everywhere—and rapidly improving facial recognition capabilities—what people do in the public eye is less and less “private” every day. If you post something online, or, for that matter, do anything outside the privacy of your own home, don’t be surprised if someone else finds out about it.

Which brings us to our third point: the battle between privacy and connectedness is far from over. There’s an inherent conflict between the push for data privacy, which encourages more conscientious management and control of online data, and the convenience and effectiveness of targeted ads, which encourage corporations to continuously track personal data. So far, courts have balanced this conflict by requiring time and subject-matter limits on discovery, as occurred here, but even those limits may include a great deal of online content.

Limits on social media notwithstanding, it’s always worth remembering that one-on-one communications like emails and text messages have long been discoverable. In a sense, people seem to have a heightened expectation of privacy in their online social media postings that has never been warranted.

You Can’t Use Evidence You Don’t Find

There’s another key point here: as a litigant, you cannot specifically request or use information that you don’t know about. This opinion only came about because Mathew filed a motion to compel access to Vasquez-Santos’s social media information—and she only did that because she found some of that evidence in the first place.

Yes, in an ideal world, litigants would provide full discovery, but clearly, that doesn’t always happen. Often, you’ll need to specifically request exactly what you’re looking for—and explain why you believe it exists—before the courts will intervene to grant you access. To do that, you obviously need to have some idea of what there is to find.

Hanzo can help. Our online investigation tools scour the internet to identify social media profiles and other publicly accessible information associated with litigation opponents and then present potentially relevant information, based on keywords and date ranges, in an easy-to-understand visual format. Our website preservation tools then capture that information in an admissible, readily authenticated form that will stand up in court.

Ready to learn more about web and Social Media investigations?

Check out a Hanzo in Action webinar and see how A.I. powered investigations can help you identify, collect, and monitor key case data from across the web.

Don’t leave discovery up to your opponent. Start a conversation with us and learn what it looks like to capture confidence.

It seems like it should be easy to prove that your company owns its intellectual property (IP)—but these days, it can ...
Read More >

We've come to that part of the calendar year known as the "holiday season." Yes, there are the traditional holidays we ...
Read More >